Fresh from a career-best fourth overall in the Prestone MSA British Rally Championship, the Brettex backed Ford Fiesta R5 pilot would take on his first overseas FIA World Rally Championship event in Spain and would be faced with one of the toughest events on the calendar.

Over 310km of special stages would lie in wait for crews with the additional challenge of the opening day’s tests taking place on gravel with a switch to asphalt for the second and final day’s stages.  Competing alongside the best drivers in the world, Yates would take his experience from his British Championship outings this season to the event in a bid to gain experience for the future.

Despite being only his second year in the car, 24-year-old Yates would stamp his mark firmly on the timesheets during the pre-event shakedown, beating many WRC regulars in the process. Despite only having two runs over the 3km test, declared himself happy with the set up for the stages ahead.

After the ceremonial start on Thursday night, Friday provided 115km of predominantly gravel stages and Yates was soon on form in the hotly contested WRC2 category. However, a loss of brakes during the gigantic 35km Terra Alta stage dropped him from 23rd to 25th overall into the first service of the rally.

Once rectified, he would set a string of stage times during the opening leg that would keep him firmly inside the top 25 of the 70 strong field and would end the opening day in 25th overall. The team would set about making an overnight swap onto the asphalt set up for the remaining sealed surface legs of the rally.

Yates started day two where he left off on Friday and assumed a very comfortable position throughout the tough asphalt tests. But his hard work would be undone on the penultimate stage of the day when power steering failure on the Fiesta would force the Brettex backed ace out of the event.

With a new unit fitted overnight, Yates was able to re-join under the Rally2 rules and resumed his attack on the event for the final day. Despite being the shortest of the rally at 75km, it was still one of the toughest and he would need to call on all of his experience to ensure he could bring the Fiesta over the finish on Sunday afternoon. 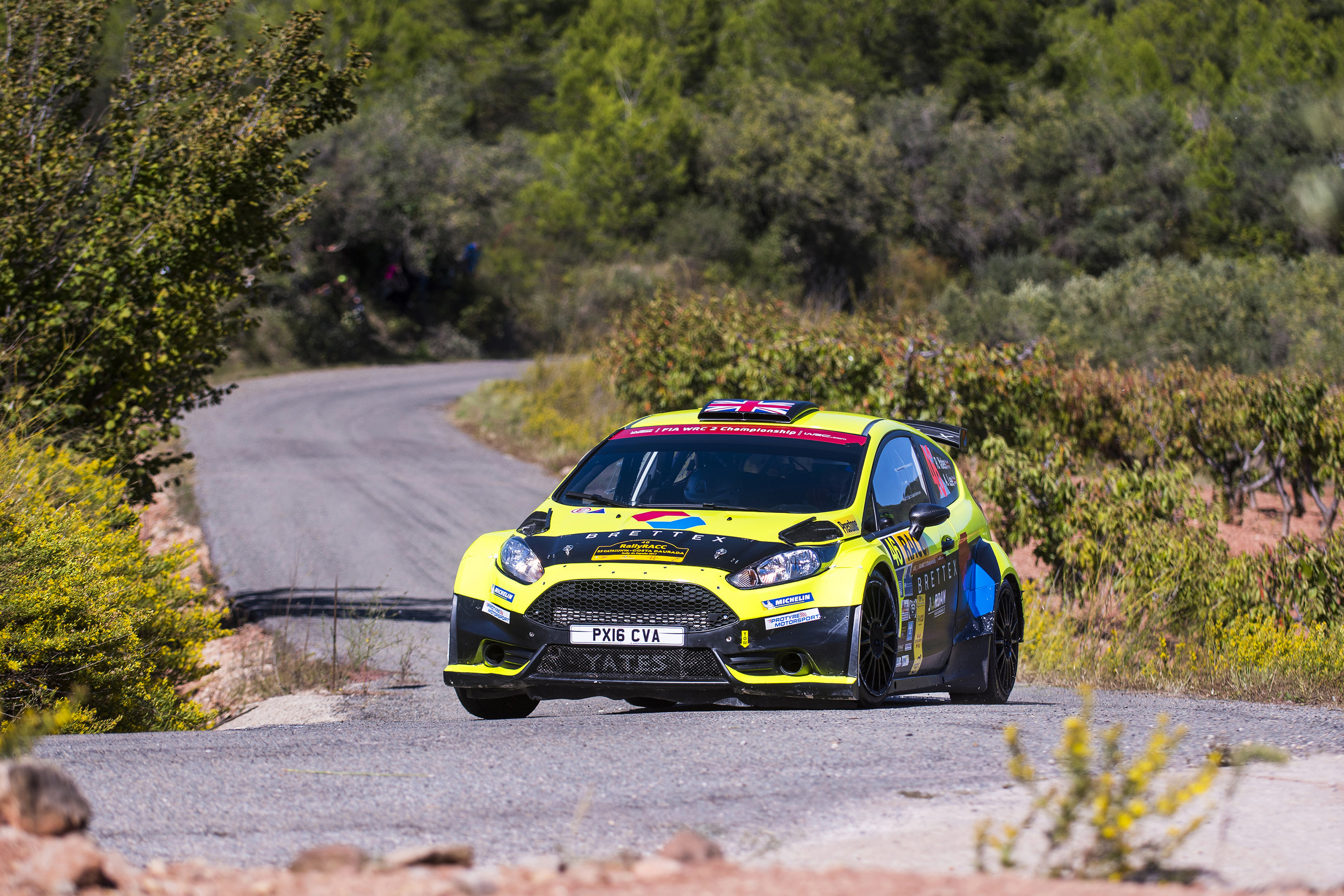 Confidence regained after the previous day’s issues, Yates was soon back up to speed and once again setting impressive stage times against World Championship contenders.  A solid final day ensured he would reach Salou and take his inaugural overseas WRC finish.

“That really was the toughest event I have ever done and no matter how prepared I thought I was, it was much harder,” says Yates.

“But to have secured a finish was really important for us and when you look at the times compared to the guys that are in the WRC2 category, we did a good job against them. It was just so unfortunate to have had the steering issues on Saturday as really I think we could have been heading for a top 25 position. But I`m overjoyed to have experienced the whole week here and I must thank the team for all their efforts in keeping us going”.

Yates feels he is now ready for his next challenge and the penultimate round of the World Rally Championship, Wales Rally GB.

“As I have said before, despite this being a learning year for me I want to be as progressive as possible. We had a clear goal at the start of the season. If I finished fifth in the BRC the team would commit to round off the season with Wales Rally GB. We finished fourth so that meant we could go to Spain as well! It’s been a great experience and it should mean we can hit the ground running in Wales as I know those stages a little better”.

Yates will now look ahead to the 26th – 29th October event where he will once again enter the WRC2 category for Britain’s round of the World Championship.

2 Comments to “ World Rally Championship success for Yates in Spain”