Rhys Yates was cruelly denied a top finish at last weekend’s Rally di Roma Capitale (20/22 July) with two punctures hampering his progress up the leader board at the fifth round of the FIA European Rally Championship (ERC) in Italy.

After taking an impressive third place in the Junior Under 28 category at the season opener in Azores, the Chesterfield driver would head to the tough three-day rally with his sights set on another podium in the category.

He was denied a repeat performance however, losing over four minutes on the second leg and forcing down the leader board, finishing 17th overall and fifth Junior.

The 26-year-old started his second ERC round this season on the right foot, setting a blistering pace in the first free practice run to go quickest overall across the shakedown test. A small mistake in qualifying meant he would end up 9th but would still have the opportunity to select a good road position for the event.

Friday night’s super special was a short but spectacular blast through Rome’s streets with Yates in 13th after the 1.8km test. The rally proper started on Saturday with over 97km of special stage action ahead, spread across seven stages.

The first of the day was one of the longest in the event and Yates would suffer the worst possible start to his rally, clipping an unseen rock and puncturing the front right tyre. With over nine kilometres to go, the decision in the car was made to press on rather than change the flat, driving mostly on the rim for the remainder.

Around one and a half minutes were lost, but Yates was duly confident of regaining any deficit on the long and arduous event.  Sadly a second puncture in the fifth test would seal Yates’ fate and with a further two and half minutes lost, any chance of a top position in Rome would disappear. 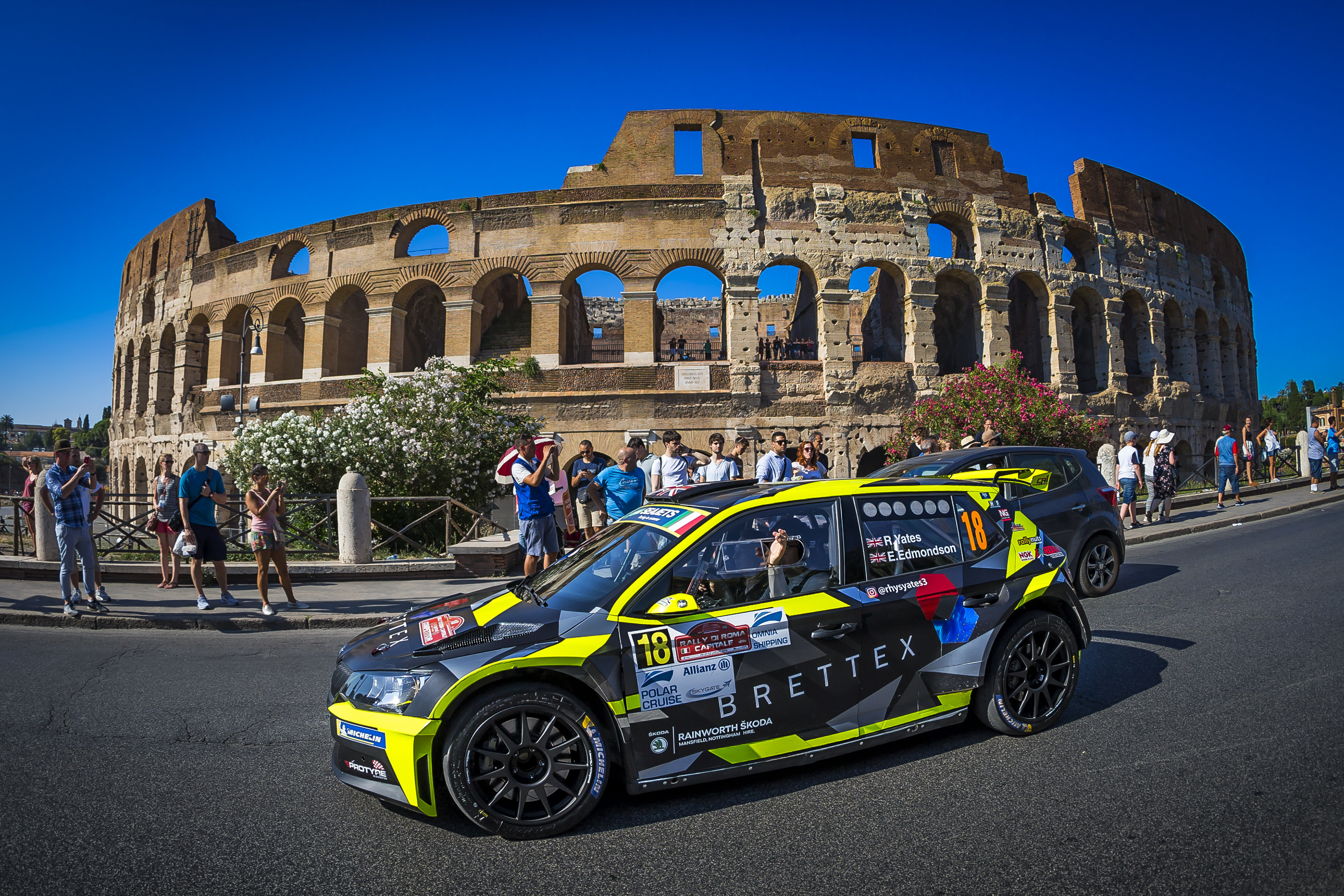 Rhys has a tough time in Rome- Image credit: Josef Petru
Yates elected to adopt a fresh approach on the second day, “resetting” and banishing the previous days issues to the back of his mind. Running lower down the order would prove tough, but he returned a mature drive over the final day, electing to use the mileage to further his experience of the stages rather than push for an outright result.

His consistency was rewarded with a top twenty finish and fifth Under 28 Junior after languishing down in the 30’s for much of the opening day.

“It really has been a frustrating rally for us and we ran out of luck this weekend but I’ve still really enjoyed the event,” said Yates.

“Those two stages ruined any chance of a result but at the end of the day that’s rallying and you have to pick yourself up and get on with it. Sometimes that’s hard to do but we made the most of today (Sunday) and ensured we built up as much experience and knowledge of the stages for the future.”

Yates believes he had a realistic chance of a good result at the weekend and remained optimistic about his overall speed.

“Our expectations were not too high but I definitely think a podium could have been possible without the punctures. But we’ve learned a lot from this event and the Italian stages. They seem to require a different approach when writing your pace notes so we should be more prepared for when we return.

When you look at the leader board most of the guys out front have done this event a few times so overall I’m pleased with how it’s gone. We came to Rome for experience and we have certainly had plenty of that.”

The focus will now shift back to the British Championship as Yates looks to his next outing which is the Ulster Rally in August.

Rally star Rhys goes around in circles… and loves it